From the Society of the Spectacle to the Consciousness Industry

We are transitioning from a knowledge and information economy to that of the neural economy. Just as the knowledge and information economies subsumed the industrial economy that predated it so too will the neural economy, referred to as neural capitalism, subsume the knowledge and information economy. This new form of capitalism is focused upon the networks of the material brain, using it as a source of data. Through new immanent technologies, like Neuralink and Optogenetics, it will act to normalize our perceptual-cognitive faculties through a process of called neural subsumption. As such all our thoughts conscious and unconscious will provide data for Big Data and what Shoshone Zuboff refers to the Big Other. As she states in “Big Other: Surveillance Capitalism and the Prospects of an Information Civilization, “False consciousness is no longer produced by the hidden facts of class and their relation to production, but rather by the hidden facts of commoditized behavior modification.” With this transformation will come a complex rearrangement of techniques of power of which neural surveillance is one. This is where Neidich’s beautiful yet critical, suspended neon light sculpture takes off. His speculative sculpture uses flashing words, which appear and disappear to create linked phrases all connected in a three-dimensional lattice of relations which are at the heart of what he calls the consciousness industry. One notices that the sculpture is historically traced in a vertical direction from bottom to top with years directly following the Second World War at the bottom and our present-day situation at the top. The spectacle as a tool of alienation, as was first described by the artist Guy Debord in his book The Society of the Spectacle, was the source of despotism in that period of time, especially in the ways that it organized visuality and created perceptual-cognitive normativity. One might say that it constituted a high form of modernist governmentalization which still depended upon the senses and the distribution of sensibility. In our new chapter of civilization, the idealist suppositions it depended upon had been substituted by a more direct interaction with the material brain and its partner the pseudo brain elaborated in deep learning neural networks. These deep learning neural networks provide an artificial connectome, or totality of all the brain’s connections, which rivals the simulacrum or the pseudo-world, Debord wrote about. As such the Society of the Spectacle has become less important in suppressing agency and social media and googling have become more important. This is what Byung-Chul Han has called Psychopower in which cognitariats happily give up their freedom. Neidich’s understands that this psychopolitics will transition in the coming years to a neural politics or neuropower as the result of direct action upon the brain and mind by a omnipotent Consciousness Industry using the new apparatuses of brain computer interfaces and Optogenetics just to name a couple. But this work is not simply an explanation of these immanent conditions but a reaction against them. He disperses words such as REDISTRIBUTION OF THE SENSIBLE, BRAIN WITHOUT ORGANS, VARIATION, COGNITIVE ACTIVISM, AYAHAUSCA in flashing green neon inside the interior of the networks as saboteurs to the subsuming rationality of the Conscious Industry.
Artist

Neidich currently works between New York City and Berlin. Over the past five years, American artist Warren Neidich has used written texts, neon light sculptures, paintings and photographs to create cross-pollinating conceptual works that reflect upon situations at the border zones of art, science, and social justice. He is founder and director of the Saas-Fee Summer Institute of Art, which last summer focused upon “Deep Ecology in the Cognitive Capitalocene,” in collaboration with The Brooklyn Rail. Selected solo and group exhibitions include the Venice Biennale, Whitney Museum of American Art, P.S.1 MOMA, museums and galleries all over the world. His work has been the subject of over 150 magazine and newspaper articles. Recent awards include Stiftung Kunstfonds NEUSTART KULTUR (2020 and 2021), Hauptstadtkulturfonds (2021), and Katalogförderung des Berliner Senats (2017). 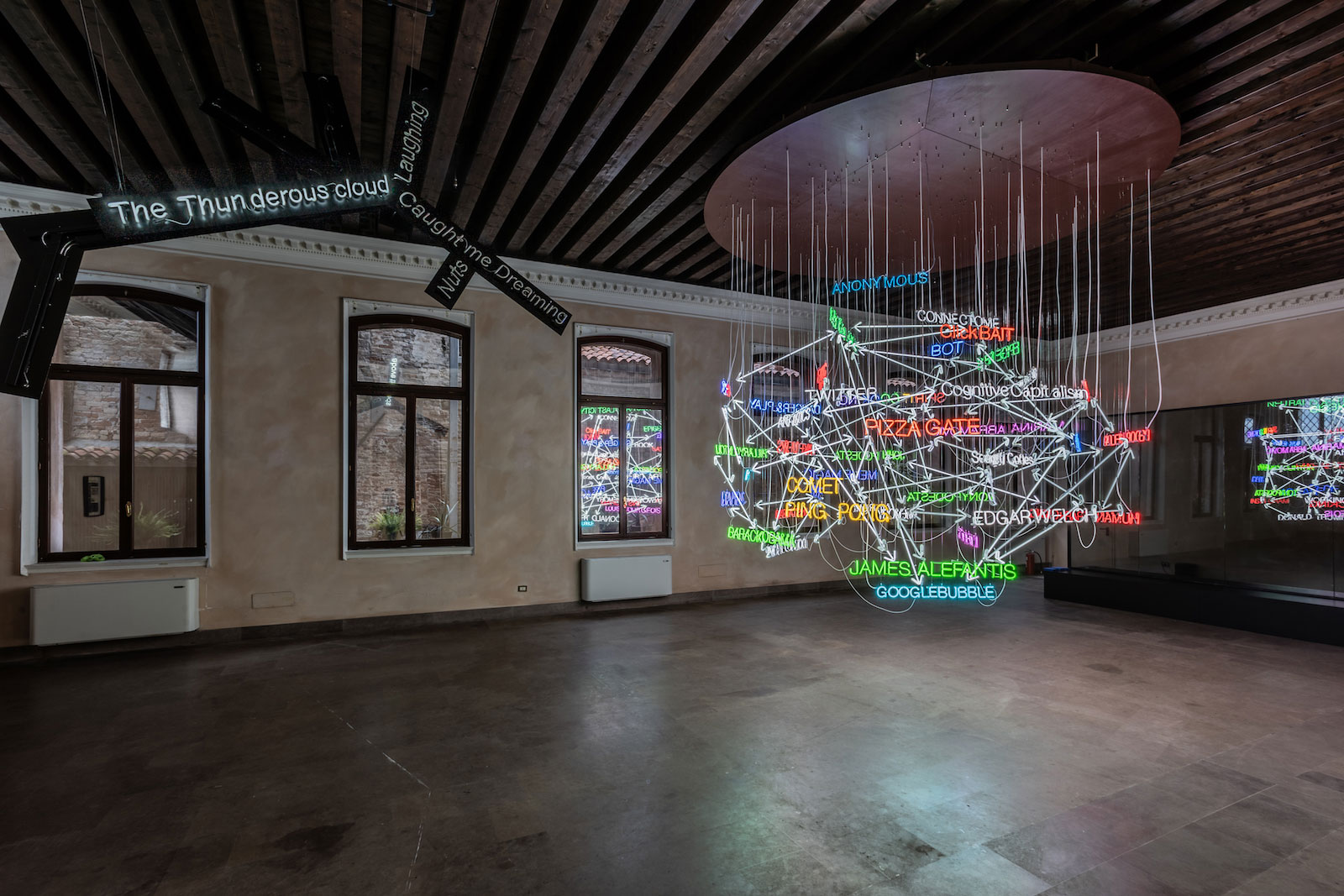 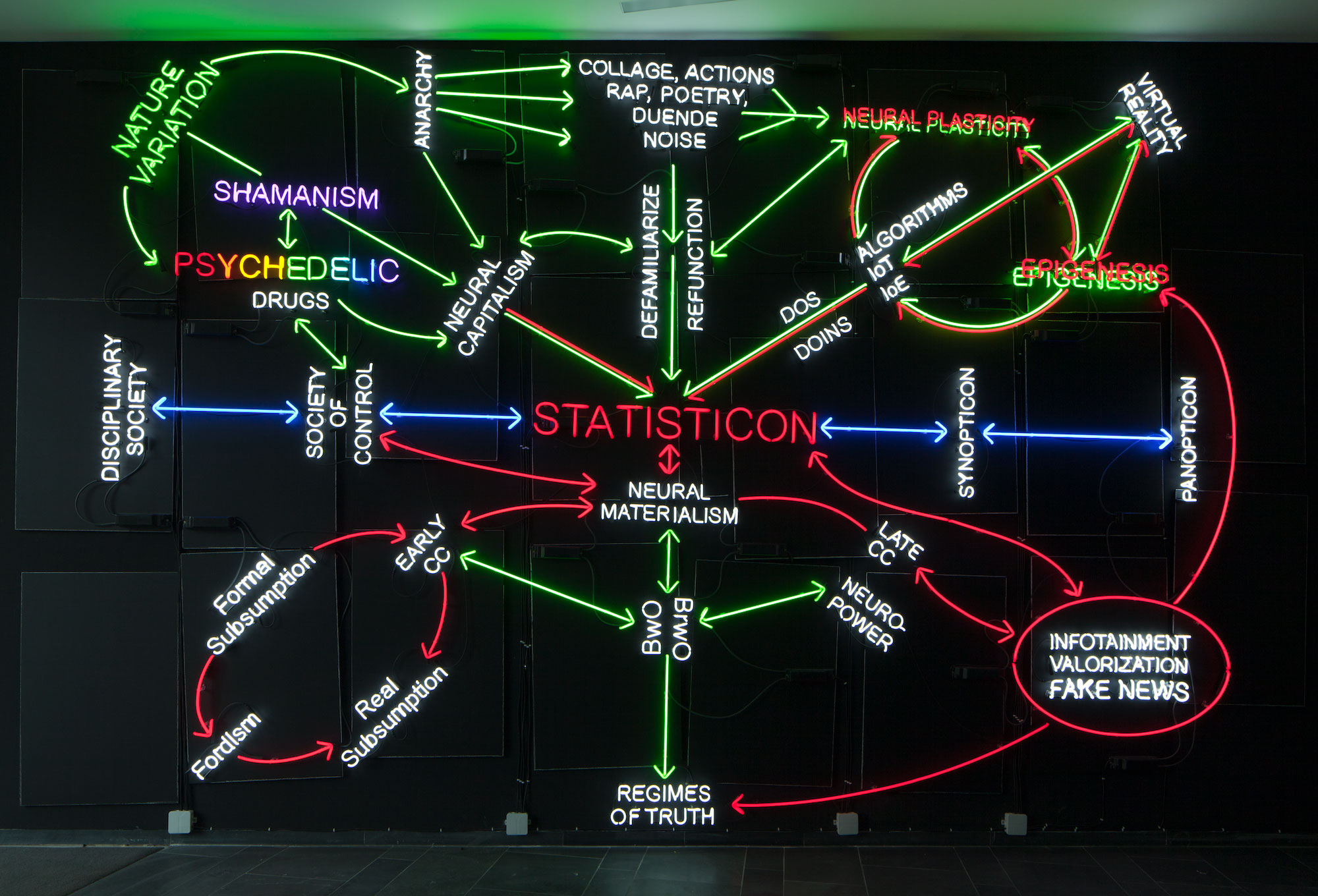 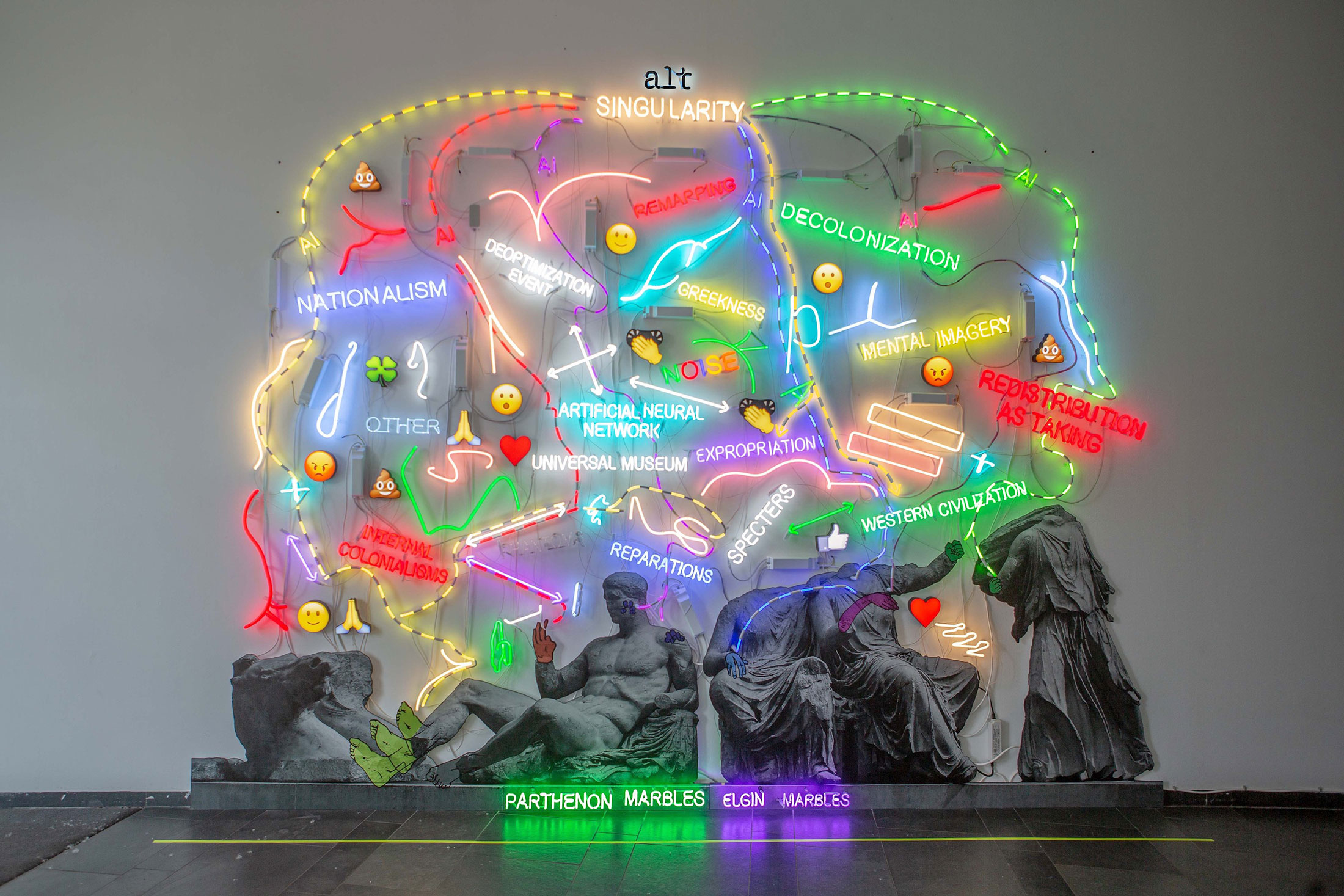 A Proposition for an alt-Parthenon Marbles Recoded: The Phantom as Other, 2022, Detail, Kunsthalle Nuremburg, Germany, Neon light and LED, 1 meter x 1 meter